THANK YOU AND KUDOS! 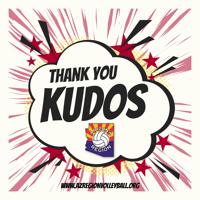 The Arizona Region of USA Volleyball takes a moment to praise the teams going above and beyond to exhibit good sportsmanship, citizenship and/or enthusiasm/excellence as "work teams" at our AZ Region events.

From Aspire – Aspire 16 Royal stayed to ref for Club Cactus

From Court One – SAVA 14 Orange and AZ Team Thunder 13/14s both agreed to ref matches help catch up on other courts.

From Legacy – Altitude 14 Elevate for working the last match so Gila Valley Jrs could get on the road to Thatcher
Club One 13/14 Yellow for working a match to cover a  no show team.

From Spiral – AZ Sky 13N2 reffed a match to give a break for a team/court that was behind.

Aspire 13 Silver stayed to ref the last match to let Shonto get on the road home.

Special thanks to Amishawn Krein (referee), the Stones Family, Riley Smith, Daniel Arrington and Cindy Kirk for helping to speed up the finish of the night by covering the ref assignments on 2 courts so we could split the last 2 matches from one pool and play on 2 courts at the same time.

Club One 2 Silver coach Jessica Blum helped referee to catch up a court that was behind.

From Sporting Chance
Club Cactus 16 Silver stayed late in the PM wave so Hanai could drive to Phoenix.

Youngker Site Director gave kudos to Momentum 16 Red but did not indicate what they did.

From the AZ Region building: APV 13 Wendy came from another site and reffed the late matches of the morning pools to help get the afternoon start accomplished

From Court One: East Side Blaze 14R covered the ref assignment for Sedona Jr 14s

From Skyline Gila River: Victorium 14 Elite took the ref assignment for Nexus so that they could travel to their next site.

Spiral 14 Lauren stepped in to work so that GVJ could get on the road home after bracket play.

From Greenway: Nexus 12U Lance offered to pick up lunch for AZ Sky 12 Gold when its morning pool ran long. "Thanks to them, we were able to get a little bit of fuel into our girls before they were right back on the court for PM Championships Pool!"

From Skyline Gila River – Livewire 15 Black took over EVJ 15N1 Tempe ref assignment so they could start their match on the other court.

AZ Storm Elite 15 Lightning covered a court to ref because the assigned team left without fulfilling their ref assignment.

Aspire 15 Black took over AZ Storm Elite 15 Lightning ref assignment so they could start their match on the other court.

AZ Storm Elite 15 Lightning took over Victorium’s ref assignment so their match could get started on the other court.

From Spiral – AZ Epic 15N stayed to ref to allow a Tucson team to get on the road.

Aspire 13 Silver: For reffing at Spiral so a Tucson team could get on the road.

From the AZ Region facility – Club Cactus 12 Red reffed a court to speed up the court.  The court was an hour behind at the time.

A Livewire 15 Red dad offered to empty the trash container the AM group left overflowing instead of taking their trash home with them. - THANK YOU!

From Skyline Gila River – AZ Flames coaches and AZ Wild players help break down their court at the end of day saving much time for the site director at the end of a long day.

From Court One – Nexis 15 Nicole stepped in to ref the last match so that LVBC could get on the road to Tucson.

AZ Epic 16 Elite agreed to ref an extra match to speed up four other teams.

Rush 18s stayed to ref last game so AZ Sunfire Volleyball could head back to Phoenix.

From Spiral: Boys team AZ Fear 14 JJ helped move up the nets to the right height. Club VOS 14 Blue helped ref so a team from further away could head home.

At Court One, 3 teams help speed up late courts by reffing.

AZUnited 14 Havoc and AZ Sky 13N1 agreed to help and Club VOS Chandler 18s stepped up on their own. Thank you!

Kudos to Victorium 12 UA, Revolution 12 Elite and Altitude 11 Reach - All were willing to change the order of matches in their pool to allow Ascent to get on the road back to Flagstaff.  It was beginning to snow and they needed to get on the road before it got bad.